A lot of our customers ask us "why we do it, and why did we start to make custom cymbals in the first place." It is simple. We love cymbals!

What makes a custom cymbal company successful in the very crowded " cymbal business " these days? We believe the answer to this question is quite simple...

Offer a product that is reliable, better built than the competitor's and give artists and customers the kind of treatment you would give to your family or close friends. It seems like a simple concept yet it is why T-Cymbals is the fastest growing and most sought after custom cymbal manufacturer today.

After close to 10 years of marketing and designing cymbals for other cymbal companies, we decided to start creating our masterpieces. What we have to offer is a fully custom line of cymbals tailored to the player. We have brought all the years of our experiences as both a player and a "cymbal fanatic" to the table. We have our own niche in this business and we are happy to know there are other companies filling other niches. Take your time and really examine the products before you buy. What TC offering is 100% Handmade Turkish cymbals, made at our facility in Istanbul, Turkey by drummers. All the TC staff are highly skilled craftsman. We play what we create and we stand by what we create. Our goal is to offer something special to the player who wants something other than the typical handmade, machine made or hand hammered cymbals.

Something that makes a statement. Something that reflects you, the player. No matter if you are a rock, punk, jazz or a country artist, TC has cymbals that will match your playing style. TC prides itself on producing fully custom handmade Turkish Cymbals by staying loyal to the art of cymbal making. However, besides creating full on custom line cymbals we produce several cymbal projects to satisfy the needs of drummers all around the world. Custom cymbals allows customers to have a very special cymbal without the longer waiting period of a fully custom order. We urge you to poke around our website, look around the net. We believe that you'll see what we have going here is a special blend of quality, integrity and style. In this industry it all comes down to the quality of your product, the dedication of your customer/artist relations and the ability to continue to push the limits of what is possible in percussion. We are dedicated to being the cymbal company you want to play for and we will continue to create cymbals that sound better, look better and demand to be heard every night, at every sound check and every crucial show!

T-cymbals are as individual as you are, and like no other you have heard or seen before.

PS: And believe us that cymbal making is not a secret:), it is not about secret alloys or formulas vice versa. It is a long and hard work. The secret is to put your heart in it. And you can do it only if you really love them. 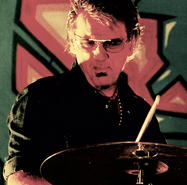 arbak dal
founder
“ For me TC is what I am. My joy and passion. A childhood dream. The first gig. Maybe the first groove played. TC’s are bronze disks that makes me feel alive... “ 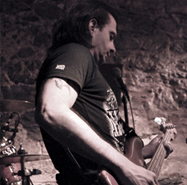 burak kulaksızoğlu
founder
“ As a bass player being a cymbalmaker is something that I have never dreamed of. But being able to create instruments for music makes me feel different and feeds my sound obsession.“

Historically, cymbals were made from individually cast cymbal blanks which were then hot-forged, often with many annealing processes, to form the rough shape of the cymbal.

The finishing stages consisted of cold-hammering to unevenly harden the metal, then turning on a lathe to reduce the thickness, and then often a final cold hammering.

The hot and cold hammering were all performed entirely by a highly skilled hand and was a labour-intensive process. The only machine to touch the cymbal was a hand-held lathe.

This lathing step could decrease the weight of the cymbal by two-thirds or more, and resulted in further uneven hardening which produces much of the tone of a traditionally made cymbal. This effect was deliberately enhanced by use of a coarse lathe tool, and sometimes by a very limited final polishing, leaving the lathe tool marks as "tone grooves". Traditional cymbals are lathed over the entire surface top and bottom.

Each stage of this process has been modified by the use of recent technology. One of the main effects has been that far closer manufacturing tolerances can be achieved, resulting in more consistent sounding cymbals.This has also provided the opportunity to omit some of the traditional steps completely, and so unlathed, partly lathed, and even unhammered cymbals have entered the catalogs of major makers, and achieved widespread acceptance.

Many modern cymbals are stamped or, less commonly, hammered from sheet metal.

Many manufacturers claim that their cymbals are "hand hammered", but again these words may not always mean the same thing.

The difference in sound is due mostly to the nature of the hammering: hand hammering is done randomly (that is not in a regular pattern) and thus the cymbal has a darker sound-even if this "random" style is dictated and executed by a computer. Symmetrical hammering- which is almost always done by a machine- gives the cymbal a brighter sound. So it is random hammering versus symmetrical hammering that accounts for the major discrepancies between the sounds of various cymbals.